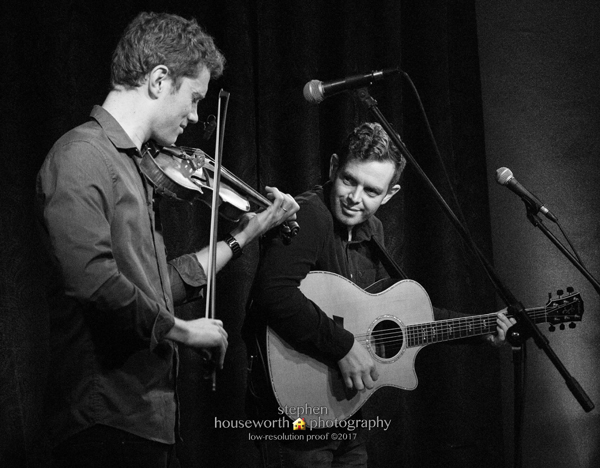 Two of the most acclaimed young musicians in Irish music, today, Finn Magill and Dave Curley will perform a house concert in Indianapolis.

Dave Curley is one of Ireland’s leading multi-instrumentalists, vocalists and a champion step dancer. Hailing from Co. Galway on the west coast of Ireland, Curley has brought his wealth of talents to the largest of stages in North America and Western Europe. He has performed at the prestigious Ryman auditorium in Nashville, Tennessee, recorded with Grammy award winners Ron Block, Jeff Taylor and Buddy Greene and toured with Grammy award winners Moya Brennan of Clannad and Ross Holmes of Mumford and Sons. Multi-instrumentalist, All-Ireland fiddle finalist and recording artist

Andrew "Finn" Magill has carved out a name for himself in Irish, American and Brazilian music, collaborating with everyone from Rising Appalachia to John Doyle. He has toured five continents and self-released four albums in everything from traditional Irish music to African fusion. Curley & Magill bring together a wealth of genres and instruments into this exciting new musical collaboration of Irish tunes and songs.

Dave Curley & Finn Magill bring together a wealth of genres and instruments into this exciting new musical collaboration of Irish, American and World tunes and songs.

Concert is in the Lockerbie Square Neighborhood

OR to purchase tix now, go to menu at the top of the page: ABOUT THE SCHOOL  >  FEES AND TICKETS

Oops, you forgot something.

The words you entered did not match the given text. Please try again.

Reply DLkdug
11:16 AM on January 28, 2019
Missing dll from a laptop? Error on loading Windows? Our website can fix it! Download your missing dll from http://founddll.com/mscoree-dll/ page. Fix the error now!